RTBF is the state owned, Free-to-air channel in Belgium which has exclusive FIFA World Cup rights in the country. They will be producing live coverage of all 64 World Cup games live online both on traditional TV channels as well as via their online streaming platform called RTBF Auvio which is available absolutely free to Belgium residents. We explain how users from outside Belgium can unlock RTBF Auvio coverage absolutely free.

All 64 games will be shown live via RTBF Auvio (available on their official website and via mobile apps on both apple and android). Although live streams at RTBF streaming platform are free for Belgium residents, they are goe-blocked if you were to access RTBF online from outside Belgium. However if we could change our IP address of the device to Belgium we will be able to unlock RTBF and that is what this guide is about.

Unlocking RTBF World Cup Streams From Anywhere In The World:

Virtual Private Network also known as VPN is a technology which help user change IP address of the device (PC/Mobile/Consoles) they are using to some other country. There are plenty of top class VPN providers including our recommended ExpressVPN which comes with 120+ servers around the world including in Belgium. Now lets get into the process of Unlocking RTBF with the help of VPN.

Basically all you need is to buy and VPN account with one of the reputable VPN providers. In this case we tested ExpressVPN to unlock RTBF streams and it worked perfectly.

How To Use VPN To Unlock RTBF:

We recommend ExpressVPN. It cost just $6.67 a month and have servers in Belgium and comes with StreamPlay technology which actually makes online streaming very smooth on any device.

After buying VPN, download their app on the device you want to watch RTBF. Their apps are available for PC/Laptop/Mobile/Tablets and even consoles.

#3. Connect to Belgium IP address inside the VPN app. 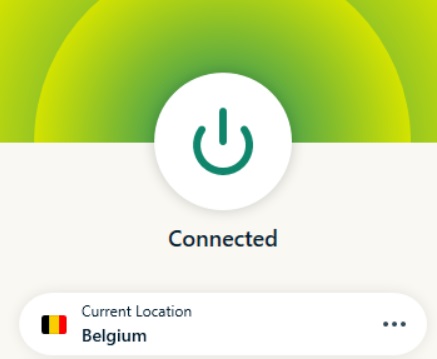 Use the VPN and select belgium as your IP address inside the VPN app. Keep your self connect to Belgium IP until you are watching the streams on RTBF website.

Once connected to Belgium IP address, visit RTBF Website or download their Mobile apps via Apple Store or Android Store. On RTBF website create an account (which is free, you will need email, name, DOP and Belgium postal code). For code use any four digit number between 1000 to 9999.

Now you have yourself unlimited RTBF streams online for absolutely free. Mind you RTBF is available both in Dutch and French languages. The above screenshot was taken in Realtime and shows how RTBF Auvio platform streams were unlocked using expressVPN.

✅ We unlocked the RTBF.be online streams from outside Belgium with the help of expressVPN. We got to say it worked absolutely fine. You can use either ExpressVPN or any other top of the line VPN which has servers in Belgium.

✅ ExpressVPN are actually have a very good deal in november where you can get 3 months free if you buy the yearly plan costing just $6.67 a month.

If you are alright watching World Cup in Dutch or French language, RTBF provide you with the best solution. Not only its the official rights holder of FIFA World Cup, it also has one of the finest streaming platforms in the world.